Having had two tough cycling tours in the Alps and Dolomites in the previous two years, I opted for something gentler in 2010.  The draw of Tuscany lies as much in the beautiful towns where I stayed, as in the cycling itself. Not surprisingly it's a tour I will remember for the food and wine, as much as the riding.

I flew from Leeds Bradford Airport to Pisa on 24th June.  Both Jet2 and Ryanair fly there.  The flight was delayed and I arrived later in the afternoon than I had hoped.  Having reassembled my bike and deposited the cardboard box in the left luggage, I made the short (2km) ride to the railway station in Pisa.  Travelling by train in Italy is easy and cheap.  I took a regional train to Sienna, changed and then took another to Montepulciano Stazione.  The station is 9km from the town. In the gathering gloom I rode quickly along the rising road. Not for the last time on this trip I realised they are not called hill towns for nothing. I had climbed 260m when I arrived in the old town.  I pushed my fully laden bike through the steep streets until I found my hotel (Hotel Duomo) perched right at the top of the town and located on the main piazza. I ate late at the Trattoria de Cagnano.

Refreshed, in the morning I had a look around the piazza before heading off on what was to be the most scenic and toughest ride of the trip. 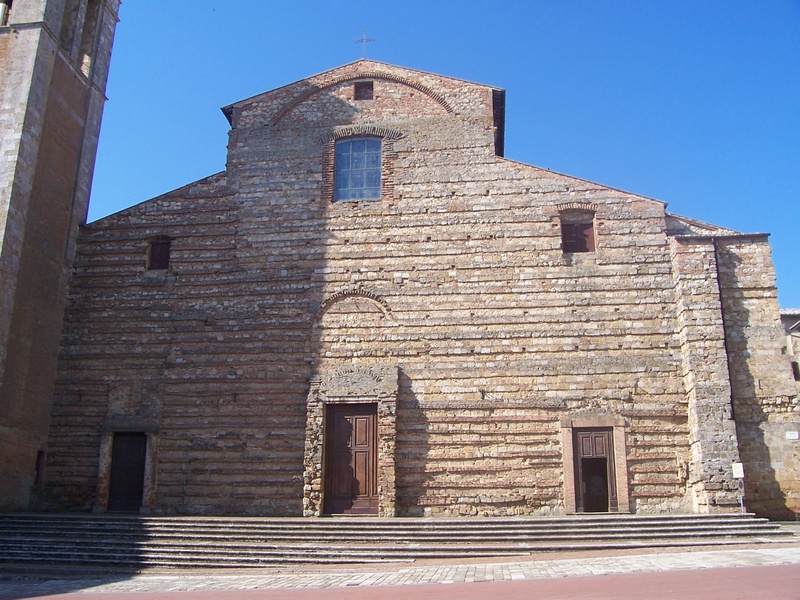 The Cathedral Montepulciano (above ) The View from the top (below) 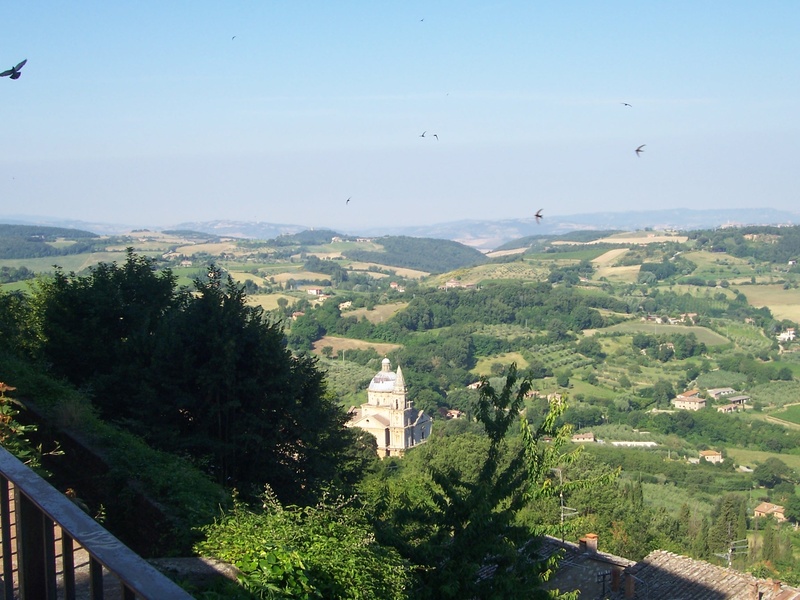 I descended steeply from the town and then took unmarked roads through Monticello to Pienza.  The surface was gravel and not ideal for a road bike. I skidded cornering near Pienza and fell, although not badly.  Nevertheless, I decided to avoid the gravel roads for the rest of the trip.

I stopped to have a look around Pienza.  I then headed south, passing through La Vittoria and Le Conie.  I had lunch on the main road at Le Bisarca before tackling the toughest climb of the day.  I climbed from 432m to 747m, over 12km, in hot conditions.  I was rewarded with a very satisfying descent, dropping to 200m over the next 14km.  The road climbs again from Monte Amiata.  I had to stop to buy more drinks at Castello de Nuovo before making the final push to Montalcino at an altitude of 549m.

Montalcino is a very beautiful town.  I stayed at Il Grigio Hotel, which was fairly basic but central.  After wandering around, I settled on the Ristorante Enoteca Al Guillare, which was a great place, if expensive.  Strangely the best part of the meal was the home made bread dipped in olive oil - exquisite. There are great views from the restaurant over the surrounding countryside.

Compared to the previous day the ride to Massa Marittima was relatively gentle. Following a climb of 3kms at the start, there is then a long descent, with a few undulations along the way, over the next 27kms. On a well surfaced and scenic road, I hit 55km an hour, reaching the junction with the SP64 in quick time. The stretch to the junction with the E78 was a relatively busy road but fairly fast.  The road from here climbs over 300m in 15kms towards Roccastrada. There is a similar length descent all the way to Ribolla, where I had some lunch.  The road is fairly flat for a further 5kms past this point.  I then took a very quiet road in the direction of Perolla, which was the prettiest part of the day's ride through wooded hillside.  At lunchtime I had been thinking I should have opted for a longer ride but by the time I had climbed the last 16kms to Massa Marittima, in hot and humid conditions, I was exhausted.

I stayed at the Hotel Duca del Mare, about a ten minute walk from the town. The hotel has a pool and I fancied a dip but by the time I had showered and changed it had begun to rain.  It chucked it down for a couple of hours in the late afternoon, clearing again in the evening, without a cloud in the sky. 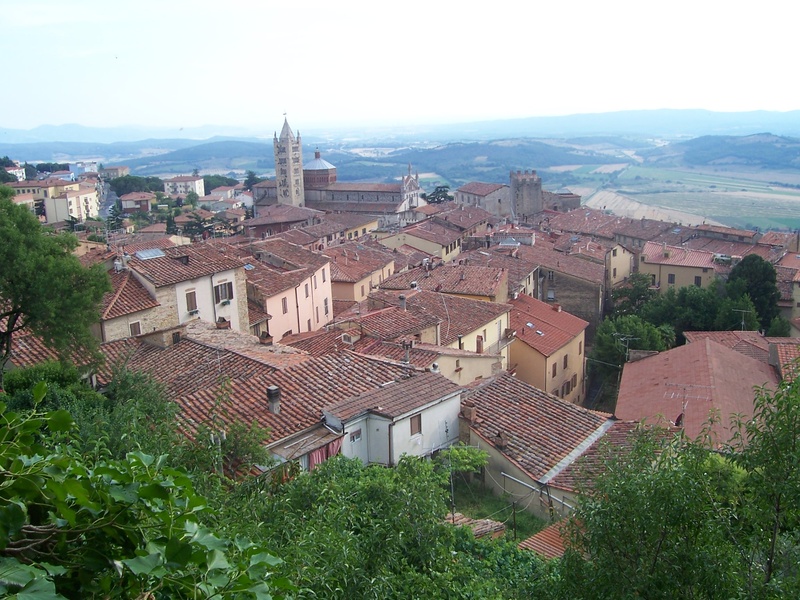 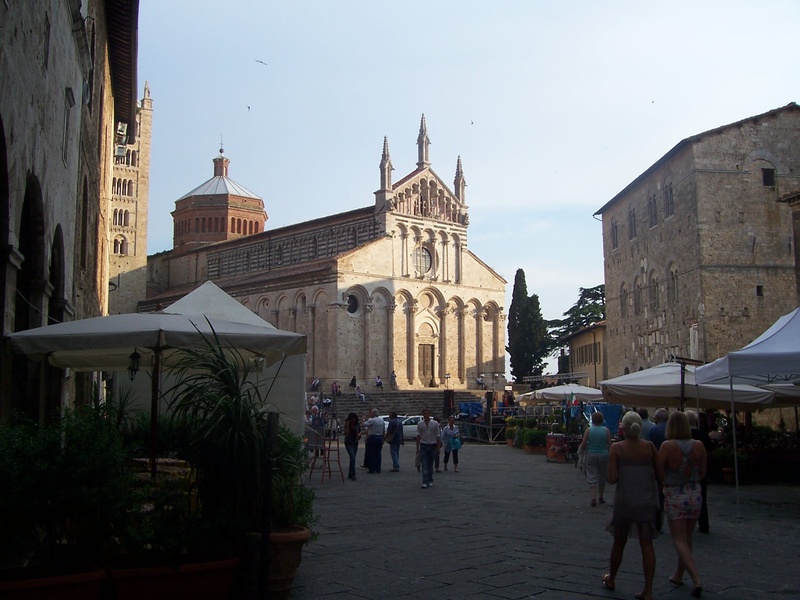 Massa Marittima was the one place I hadn't heard of before the trip and it was all the more pleasurable to discover such a beautiful place.  Not as visited as the other towns on the itinerary, it is a charming town.  I ate on the terrace of the Ristorante Era Ora, which takes a little bit of finding but is worth it.  Imaginative food and some great wine by the glass made for a lovely evening.

After a short descent from the town, the toughest part of the ride to San Gimignano was the beginning ascent - a 14km climb along a forested road, with a height gain of over 400m.  From Montieri, the road largely descends for the next 30kms, with only three shortish climbs in that distance. The road was quiet, with some typical Tuscan scenery. 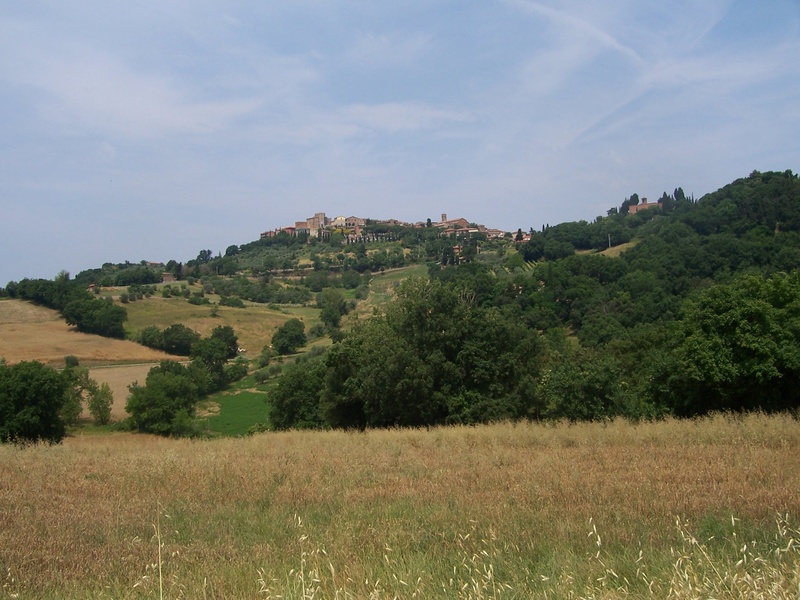 The road climbs again to Casole de Elsa (above) where I stopped for some lunch.  The last stretch of the ride was tiring in the heat, with a series of sharp climbs and descents, before the final pull into San Gimignano.

Having travelled by quiet back roads, it was a bit of shock to see the amount of traffic around the town.  I wheeled my way through the crowds to my hotel, Hotel Leon Bianco, situated in the main square.  Having freshened up, I sat in a main square cafe to watch the World Cup, England Germany match. Germans and English seemed to be represented in equal numbers and it was all very good humoured. 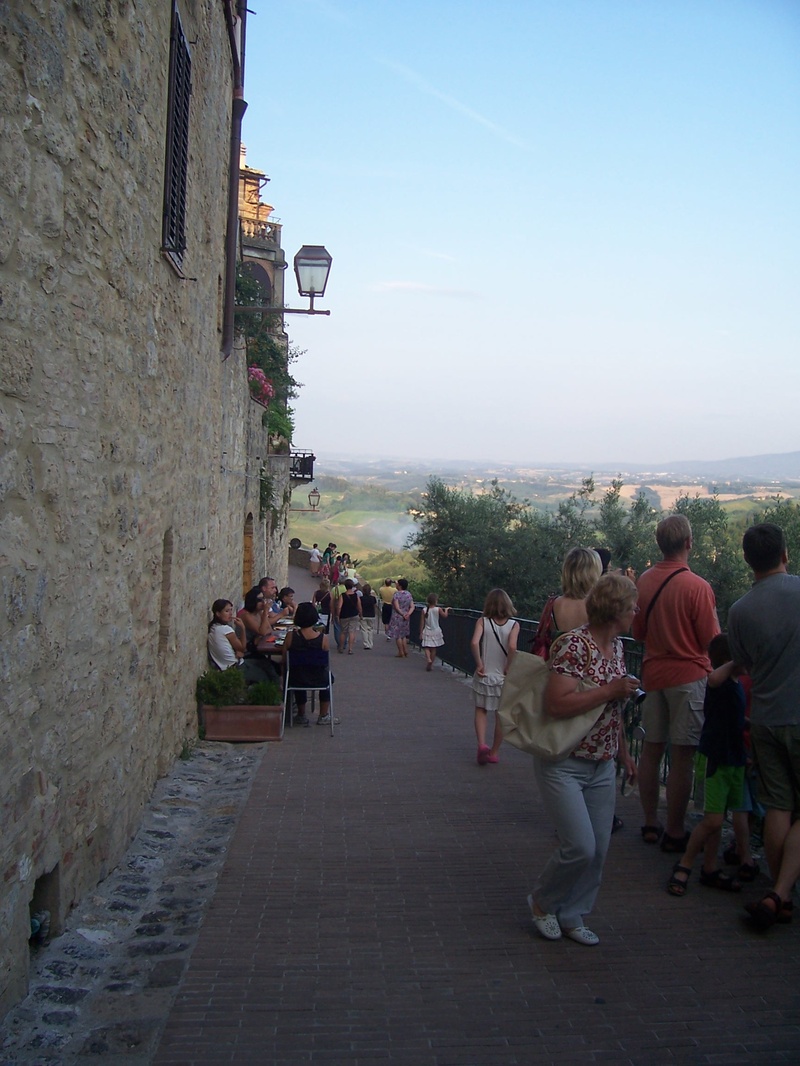 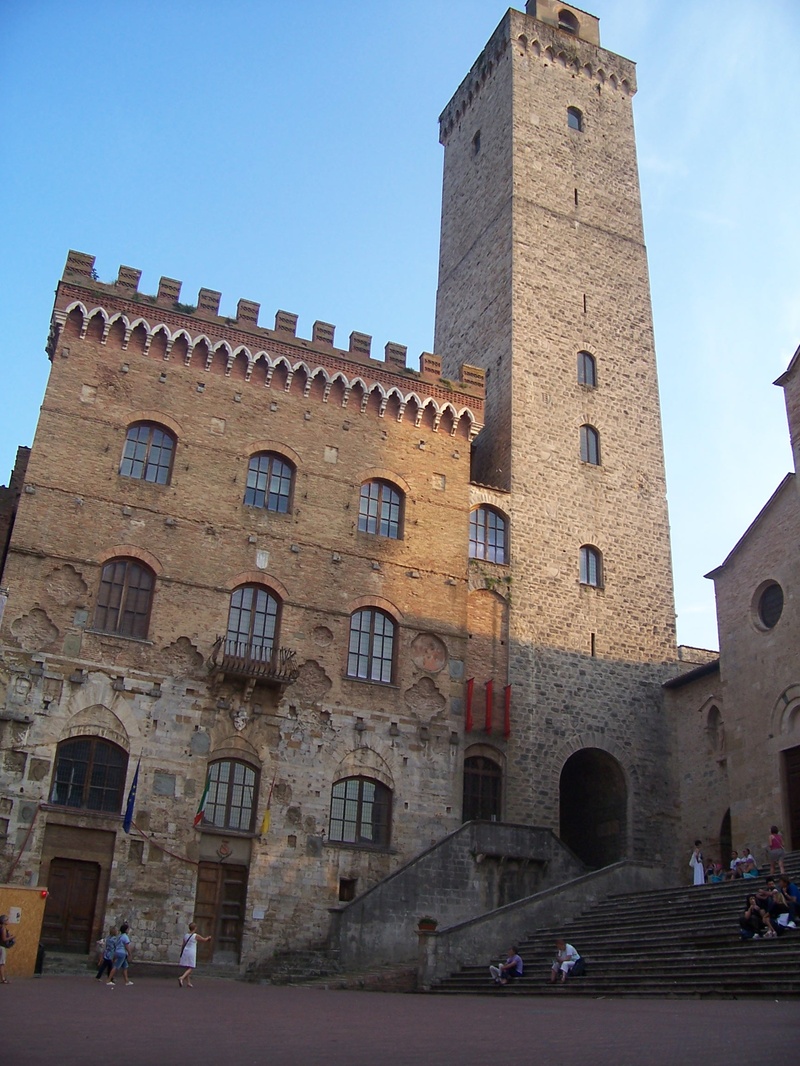 The last day of touring started as the previous day, with a short descent from the town and then, with only a couple of interruptions, a 12km climb, rising 270m.  On pretty, quiet roads, I then descended 500m over the next 18kms.  Making very good time, I paid a side visit to the small town of Montefoscoli. From here, it is a slightly downhill but essentially flat ride to Pisa. The quiet roads and good scenery peter out at Forcoli.  It would be possible to catch a train from Pontedera to cover the last 20kms, which was along busy roads but I covered the distance quickly.  I decided to give myself an easy time on my day of departure by going directly to the airport and boxing my bike, leaving it ready for collection the following morning.  I caught a taxi, carrying my panniers to the Hotel dell Orologio, for which I'd got a good price, and which was a lovely place to stay my final night.

The main monuments in Pisa were packed with tourists but remain stunning. 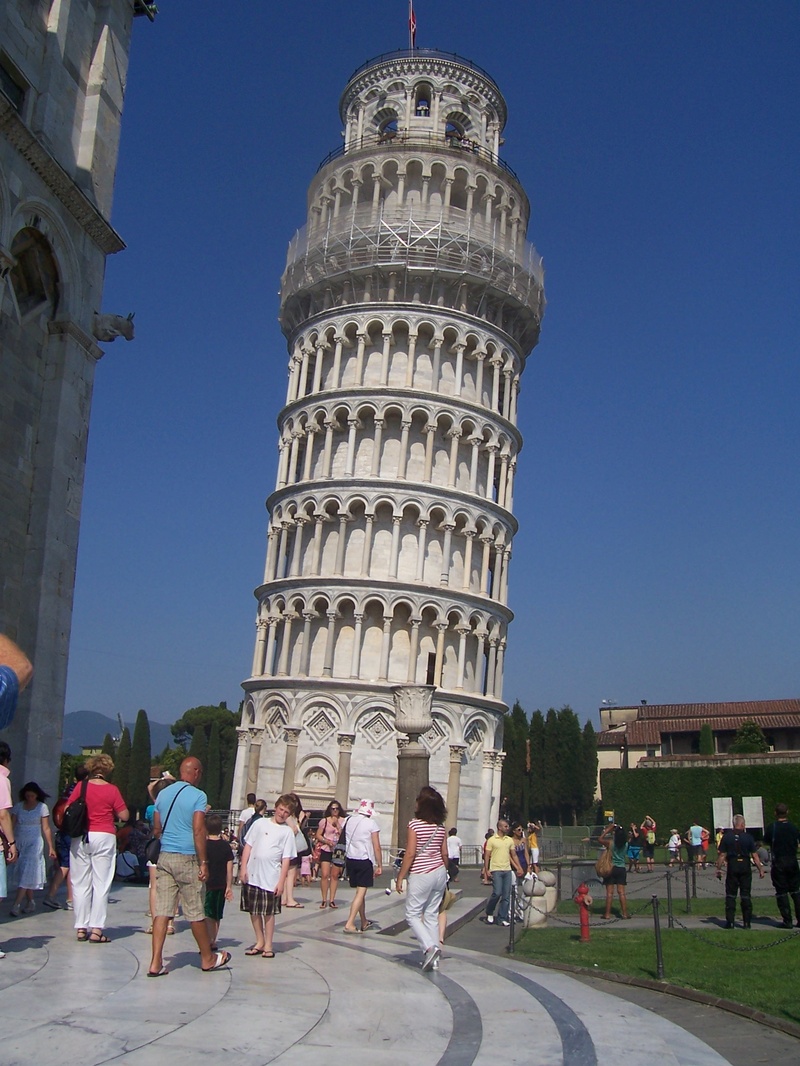 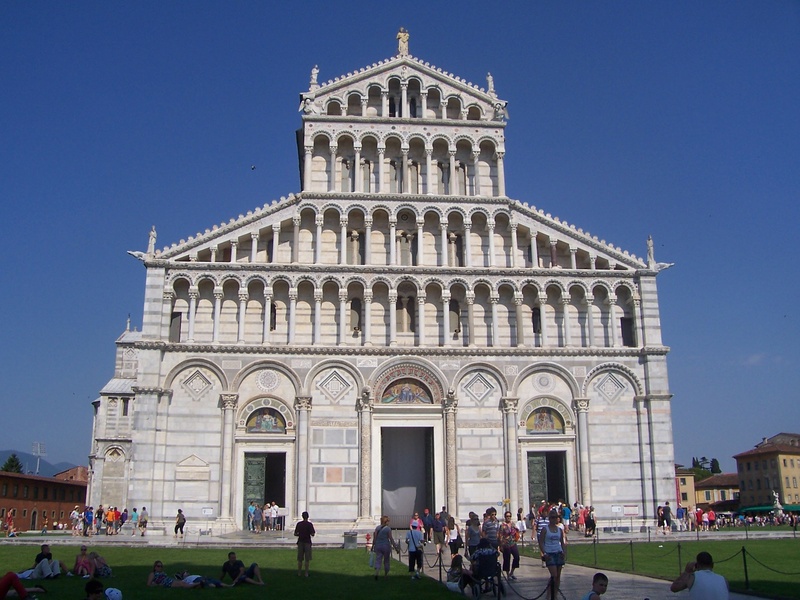 In the evening, to get away from some of the crowds, I crossed the river in search of somewhere to eat.  I ended up eating at Il Bistrot, on the Piazza la Pera.  The square itself is a little down at heel, but the place had a good atmosphere and feel to it.  The food was very good and the service excellent.

With my bike boxed and ready to collect at the airport, it was a stress free return trip to Leeds.

I had a very enjoyable  and relaxing trip.  The roads were quiet and the countryside pretty, although it lacked the drama of the mountain trips I've undertaken.  To make up for that, the towns I stayed in were beautiful, the hotels and restaurants consistently good and sometimes excellent.  In truth, this is perhaps a trip which might be better undertaken by a couple, perhaps with some shorter days, giving more time to explore the sights along the way and enjoy the culinary delights of the region.