I had been recommended a trip to Norway by someone who has toured extensively.  The likely prospect of days of riding in heavy rain had put me off for a number of years but I decided this time to take the chance. It proved to be a great trip and a dry one.

I put a lot of research into the ride, basing it partly on the Tour of Jotunheim race, which competitors complete in a day.  I would take four days, stay at some decent hotels and avoid tunnels.

I flew from Liverpool to Torp, a couple of hours south of Oslo, on a cheap Ryanair flight, on 4th July.   Torp Airport is small but it was very efficient.  I unpacked my bike from its cardboard box, put back the saddle, handlebars and pedals and was ready to go within an hour of landing.   I put my box in left luggage for my return.  It's only a short ride to the railway station but the driver of the free bus, which leaves the airport to coincide with the train to Oslo, let me travel with him.  The train arrived within a couple of minutes and I was on my way.  Each train has a guard's van with hooks to hang the bike from.  There is a half price ticket charge for the bike, which, on this occasion only, the guard waived as she didn't agree with it.  As with everyone else I met, she spoke fluent English.

It takes just under 2 hours to get to Oslo.  Unknown to me when I booked my flight, Oslo Central station was under repair that summer, which meant getting off the train on the outskirts and cycling about three miles in on a cycle path running alongside the fjord.  I stayed in the centre of Oslo at the Rica Hotel G20, which was very comfortable and not too expensive, given its location.  I ate at a smart restaurant called Arakataka.  Food and drink is very pricey.  £35 for three courses and a single glass of wine turned out to be the best value meal of the whole trip.

Because of the disruption at the station, the next morning I had to cycle out of Oslo to Lillestrom, to get the train to Lillehammer - ordinarily the connection is direct.  I arrived in Lillehammer at midday, had a sandwich and then set off about 1pm. After crossing the river, the trip began with a tough climb, with good views over the town - I climbed from 135m altitude to 587m in 6.6km. After a sharp descent there was a flat section before I turned onto the road to Fagernes.  The road is not in great condition, with quite a few potholes and loose stones but it was perfectly navigable on a road bike.  The big climb of the day started here - from 312m altitude to a height of 975m in just over 9km.  The road is very isolated, with few cars - I saw only a handful in the next few hours of riding.  For the next 30km, the ride undulates, topping out at 1037m.  The landscape is attractive, although not spectacular 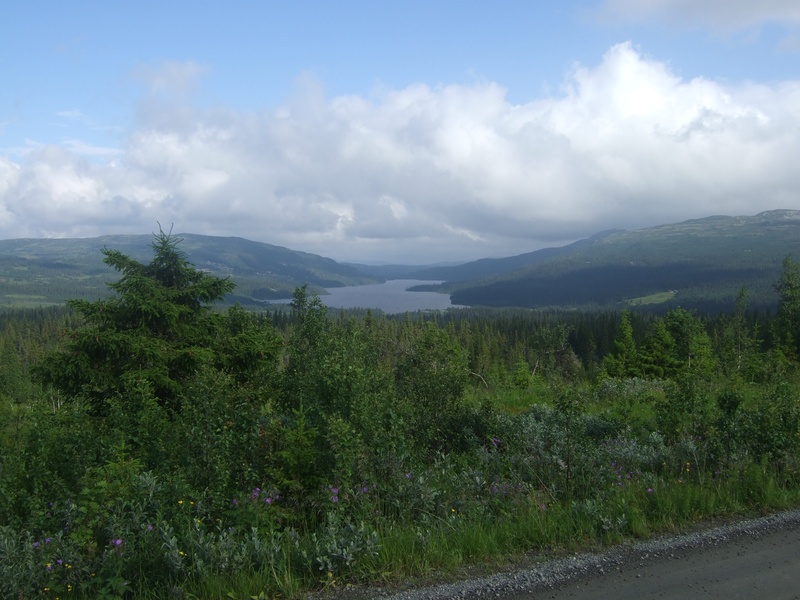 There followed a 450m descent and then more climbing back up to nearly 900m.  It was tough going.  I rested at the only cafe I saw along the route and ploughed onwards towards Fagernes.  I saw some people camping in the woods along the last section but again there were very few cars.  It was getting late - I had only averaged about 16km an hour - when I began the last descent of the day into the town.  It was a great way to finish - 15km on a good road, with wonderful views of the fjord below.

I arrived at the Quality Hotel just before 9pm - it was still perfectly light.  I had a comfortable room overlooking the lake. The buffet on offer was pretty uninspiring and very expensive - had I been earlier, I would have looked elsewhere.

After breakfast at the hotel, I set off for Ovre Ardal along the E16.  There was light traffic on the road, although it seemed heavy compared to the previous day. I crossed the fjord at the first bridge onto a minor road but it was poorly surfaced, so I rejoined the main road at the next opportunity.  The road follows the fjord for 35kms. It was fairly easy going with good views - I only ascended 100m in the first 65kms. 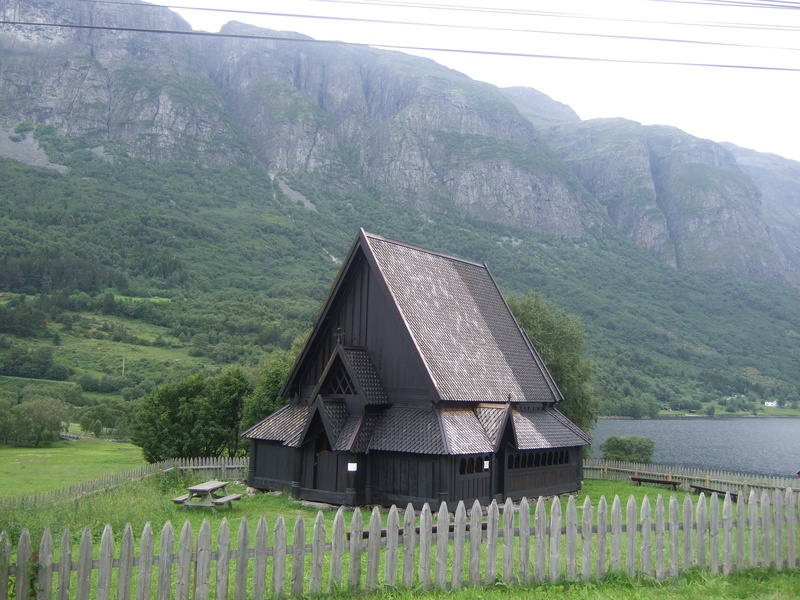 The road followed a river and then ran along the southern edge of another fjord, with the scenery becoming more mountainous.  There were few places to stop and I made do with a sandwich at a service station.

At 65km I started to climb.  The route turns off E16 at 77km onto highway 53, at which point the day started to shift from good to great.  There were fantastic views back along the route I'd taken.  When I reached the top, I had climbed to 1100m and was met with a staggering sight - a huge mountain lake, Tyin, laid out before me, with snow capped peaks in the distance. 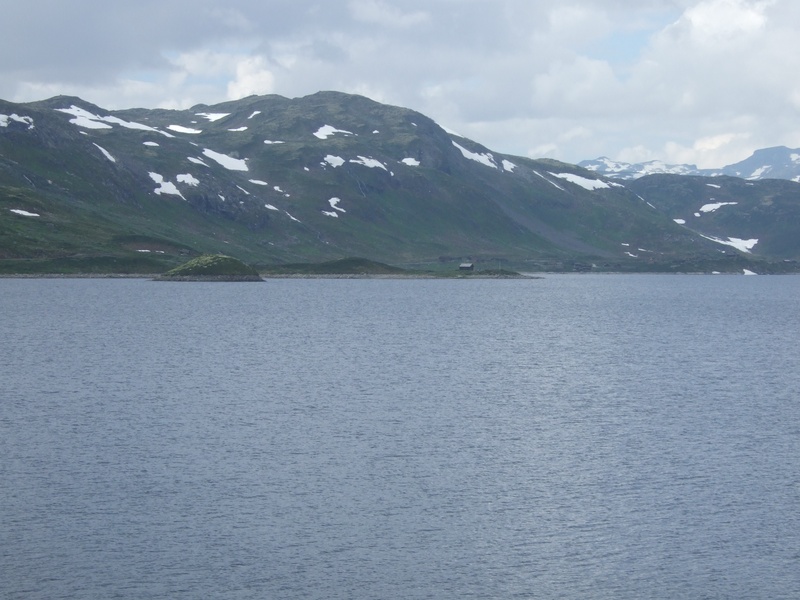 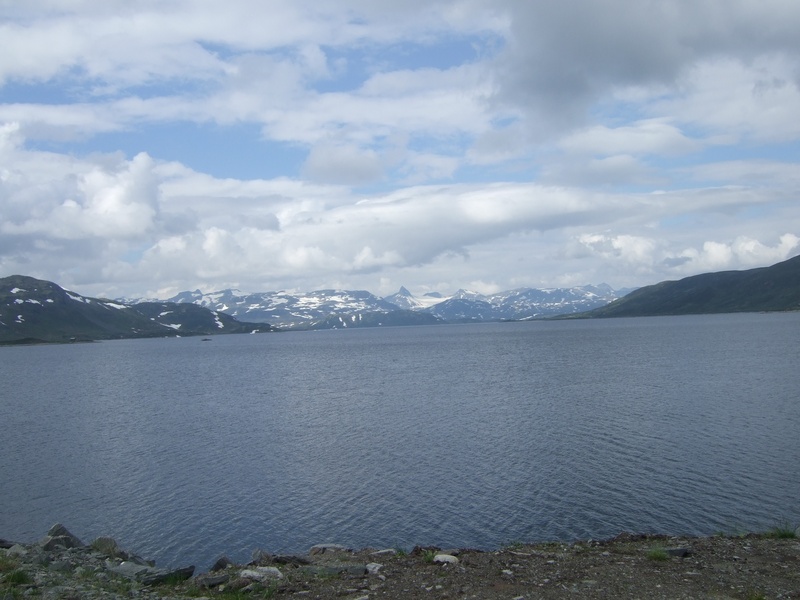 It was a fast ride along the plateau.  I stopped for a drink at a mountain lodge and was told it was the first day it hadn't rained for about a month - my luck was in. After 15km, the road then makes a steep descent to Ovre Ardal, dropping over 1000m in 17km.  The route winds down the mountain, passing through short, damp, unlit tunnels, with the town laid out below.

After such an exhilarating ride, the town itself was a bit drab.  In a great setting, it is a workaday place, turning its back on the lovely lake on which it sits.  I stayed at the only hotel, the Sitla, which is unstaffed during the day.  By calling from the phone in the entrance, I was given a code to enter and retrieved a key for my room.  I ended up eating at a Chinese restaurant, which wasn't as bad as it sounds. It was all worthwhile given the ride I'd had and what was to come.

After breakfast, I stocked up on some bananas and energy drinks and then headed off.  The route follows a single lane toll road which winds up the hillside, passing through fertile farmland before giving way to barren mountain terrain.  The initial climb is 19km, rising 1300m.  It was a warm day and the sweat poured off me, running into my eyes.  I got an absorbent towel out of my bag to mop myself as I went along.  It was very slow going - it took me two and a half hours to finish the climb but it was magnificent. 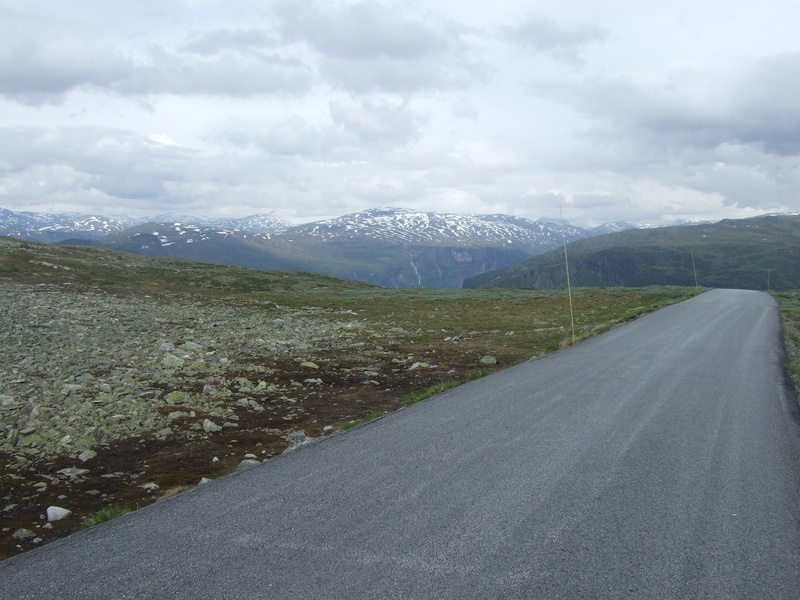 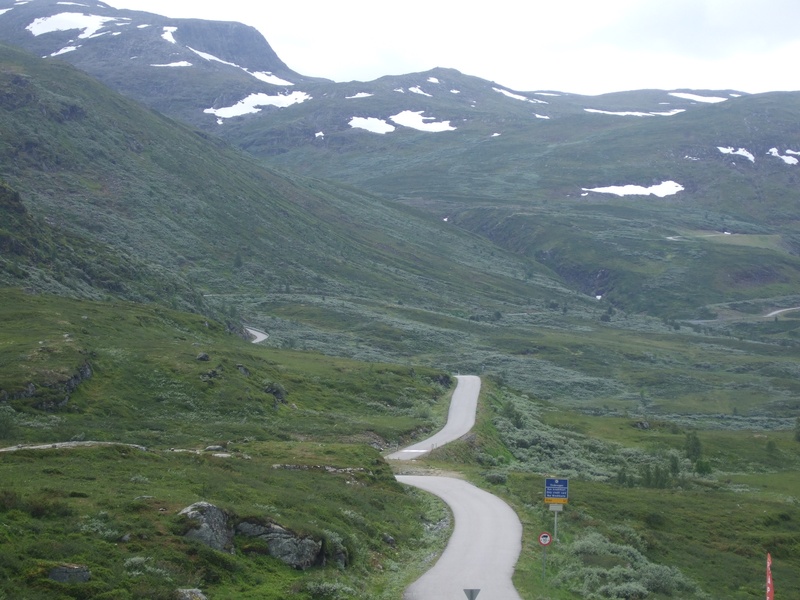 From the toll booth at the top, there is short descent and then another climb, before a 7km descent which finishes at the junction of route 55 and the Hotel Turtagro.  I stopped for an expensive but good lunch. I spoke to a hiker who had been drenched walking that morning - somehow I had remained dry.

The road climbs steeply from the hotel, climbing 300m in 6km, before rising more gradually on an undulating road to 1400m.  As the road flattens out on the plateau, there is as great a stretch of road I have ever ridden.  The Jotunheim peaks, mountain lakes, with blocks  of ice floating in them, and a huge glacier combine to create one of the most striking places I've been to. 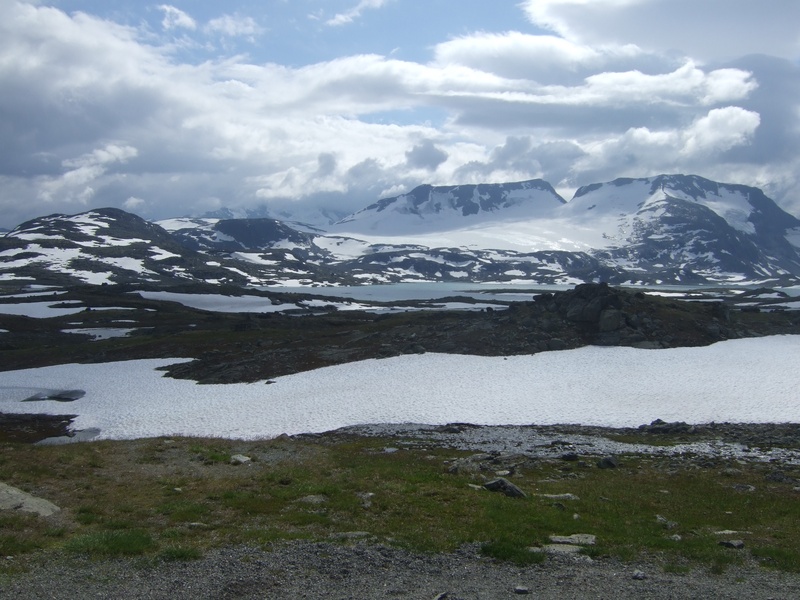 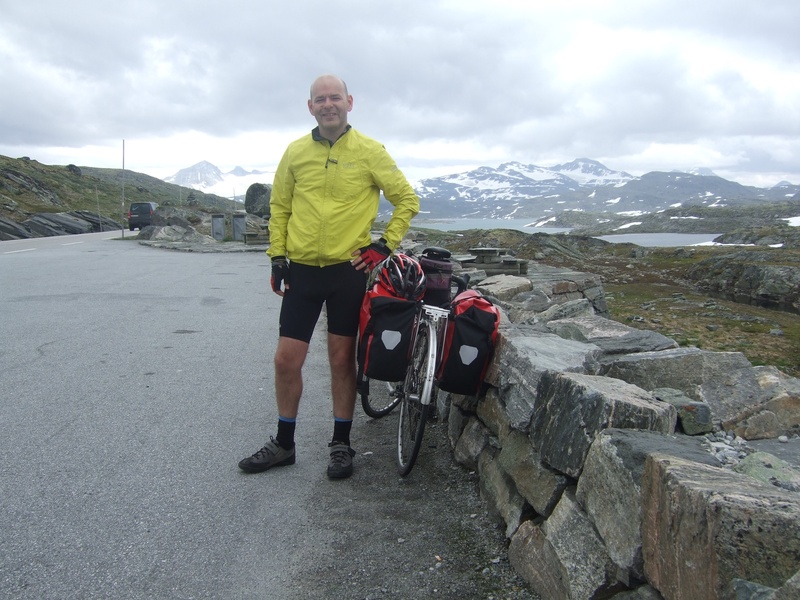 There were very few cars but one friendly driver offered to take my photograph at the highest point - 1434m.  I understand this to be the highest road in Norway and, according to Wikipedia, Northern Europe - it's called the Sognefjellsvegen. After all the hard work came the glorious descent.  The next 25km, apart from a short stretch half way, is all down hill, with 700m of descent.  It's a great road, well surfaced and not so steep as to be scary, so I hit over 65kmp/h at one point and had long stretches over 50kmp/h.

After nearly six hours in the saddle, I reached my hotel - the Elvseter - a beautiful place, made up from a series of wooden buildings.  The food was not as good as the surroundings but the staff were very friendly. It was so warm in the evening, I sat outside in shirt sleeves, having a deserved beer.  It had been a great day - I think the best in seven years of touring.

After the rigours of the last three days, my final day of the tour was a welcome easy ride.  It was a warm and sunny day, with the temperature in the high twenties centigrade.  The road descends from the hotel for a further 23k, although not as steeply as on the day before, dropping some 300m.  It was an enjoyable fast ride to Lom, where I stopped for a coffee.  I decided to take the main road, highway 15, rather than the back road,  which follows the river on the other side.  There was more traffic than I'd anticipated, so that was probably the wrong move.  I ate outside at a cafe in Vagavegan and then continued on the road to Lalm.  I crossed the river at that point to follow the back road.  As earlier in the week, this road was poorly surfaced with lots of stones and was eerily quiet - I can barely remember passing a car in the last 20km to Otta. 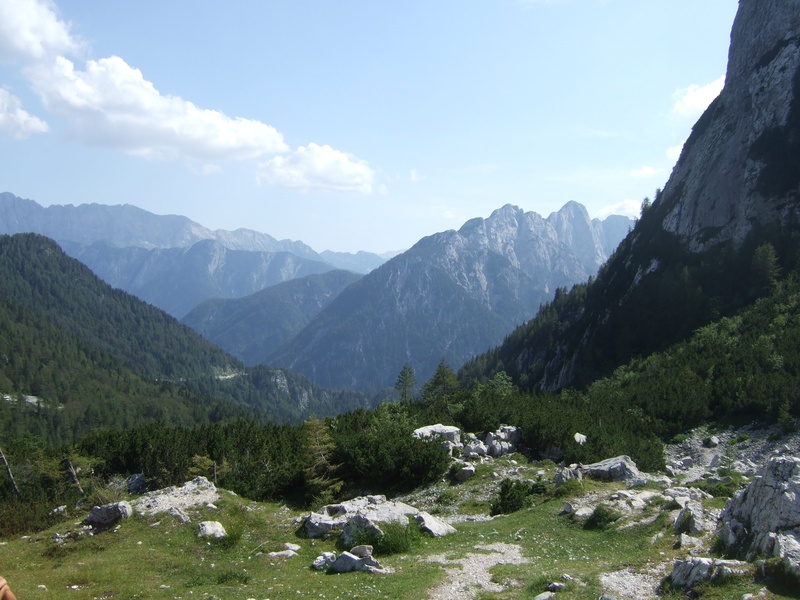 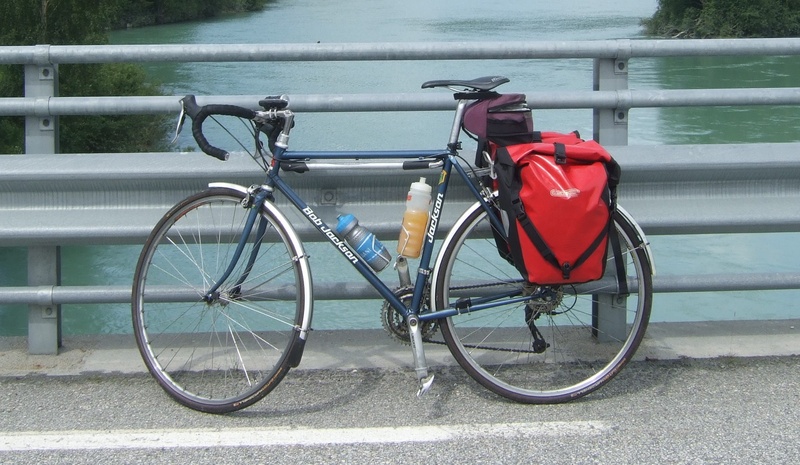 I caught the train from Otta to Lillehammer, where I stayed the night at the Rica Victoria.  It chucked it down that evening, again making me grateful for the riding conditions I had. Lillehammer was quiet but nevertheless had good bars and decent places to eat.  I ate well outside in a covered and heated area at the Paa Bordet restaurant.

The next day I caught the train to Lillestrom and then made my way along cycle tracks into Oslo, arriving just after midday.  I stayed at the same hotel as my first night. In the afternoon, I crossed the fjord to visit the viking museum, which has a series of amazingly well preserved long boats, but also for the chance to see the city from the sea.  Oslo has a great public transport system and an all day pass was the only bargain of the trip.  I caught the tram to the Vigeland Sculpture Park which  was great fun.  In the evening I went to the Grunersgate area on the tram, which had a great neighbourhood feel about it.  I had a scandalously expensive pizza at Villa Paradiso but it was very good and an excellent place to end the trip.

The next day I took the train back to Torp, disassembled my bike and flew home.

It was a great short tour. The disruption at the station was an annoyance and meant I spent longer traveling than I would otherwise have needed to.  Food and drink were very expensive.  Against this, however, was great scenery, quiet roads and very friendly people, which more than made up for it. The route I had taken had offered plenty of variety in four days and avoided the notorious tunnels.  If the weather was always like I had it, I would wholeheartedly recommend the trip but I'm conscious that a week of heavy rain might have put a very different complexion on it. You will have to decide whether to take the risk.